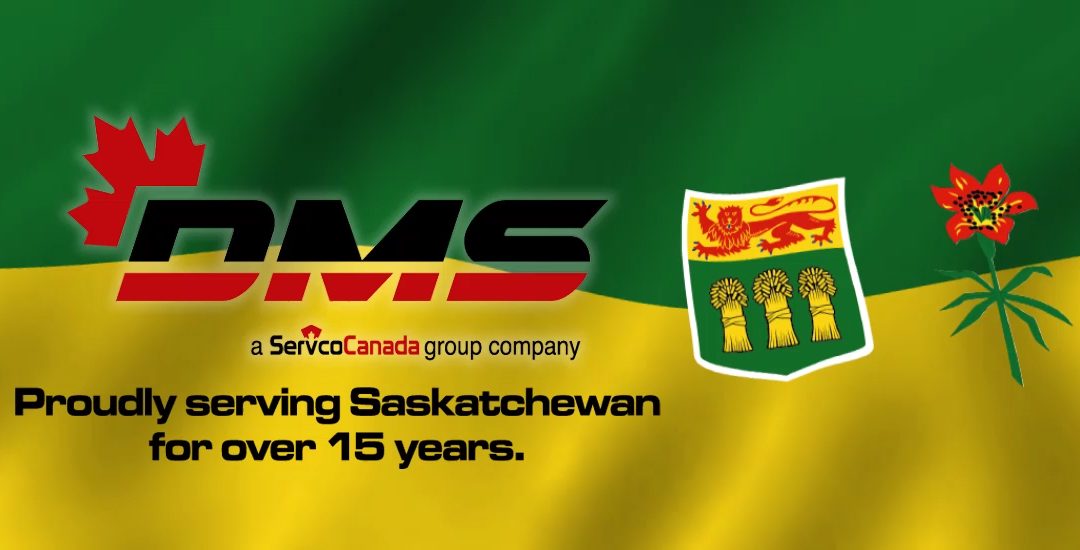 DMS Industrial Contractors got its start in 2001, boosted by the brand of its parent company, ServcoCanada. ServcoCanada is a well-known, long-established name in Manitoba and marketing comes easy when everyone knows who you are. DMS grew quickly and began working on projects outside of Manitoba – including here in Saskatchewan. However, it wasn’t as easy opening doors locally when you’re seen as the company from “next door.”

Who are you again?

DMS opened a branch office in Regina five years ago to help increase their local footprint. “DMS started out as a piping company, and quickly grew into an industrial contractor,” says Cory Neufeld, DMS Regina branch manager. “We have had a presence in Saskatchewan for five years and outgrew our original space. We had success here, but we were still seen as an out-of-province contractor.” Neufeld also knew that the ServcoCanada and DMS brands were noted brands in Manitoba but did not have any traction locally. And he knew that the marketing tactics used by their head office, which included working with the Winnipeg Blue Bombers, would NEVER work in Saskatchewan. “We couldn’t possibly market ourselves in Saskatchewan with a connection to the Bombers,” says Neufeld. “That would be crazy.”

Neufeld knew he needed to raise local awareness about DMS Contractors in Regina and set out to find a marketing tool that would do just that. He was contemplating the possible options when Rosa Brittner, a Directwest media advisor called. Brittner had been assigned DMS as a lead, and she made the call to see how Directwest could possibly help the company’s marketing efforts.

“I called Cory to see what, if anything, his company could need in marketing,” says Brittner. “As it happened, he had been looking at billboards as an option. I told him we would give him a proposal on what we could offer DMS and how we could meet his marketing goals.”

Prior to Cory’s call with Rosa, DMS Contractors had no marketing in the Regina area and Neufeld was anxious to get the DMS name out into the world. Brittner proposed an ongoing billboard campaign that would run on the Directwest boards throughout the city of Regina. Directwest would develop creative that would run on all the digital billboard faces around Regina. “The digital billboard campaign DMS chose rotates their message through all our billboard faces in the city. By placing their creative there for two weeks at a time and having the consumer see their message every single minute or more often, really helps drive that message home,” says Brittner. “And Directwest would also develop new creative at no additional charge over the campaign, to keep the message fresh.”

The campaign promoted DMS as a locally based contractor with their web address for further information. Then, DMS could check to see how well the boards performed by checking their website analytics.

A Recipe for Success

Word travelled fast when the billboard campaign hit the streets of Regina.

“I was surprised at how big the impact was,” says Neufeld. “We saw more activity through our current clients, and a major increase in web traffic.” People told Neufeld they saw the billboard ads, and the DMS brand recognition has grown dramatically.

“Cory told me it was almost embarrassing because of all the recognition he and DMS were getting,” laughs Brittner.

“Clearly, the message got out to the people who needed to see it.”

Not only did DMS get a successful billboard campaign from Directwest, they also strengthened their marketing mix with the Mysask411 Business Listing. This product strengthens and broadens the DMS web presence, helping them rank higher in online searches. The listing has detailed information about the company, including its products, services, and business hours. “The business listing and the billboard campaign work hand-in-hand to increase awareness, driving prospects to DMS,” says Brittner.

The success of the billboards has created a long-term relationship between Directwest and DMS. Directwest’s local expertise helped DMS crack a market and build their local presence. “We brought the Saskatchewan perspective to the table, which is what DMS needed to get their foot in the door,” says Brittner. “DMS is no longer just a company from Manitoba. They are a Saskatchewan company serving Saskatchewan.”

“The proof is in the pudding,” says Neufeld. “We spent money with Directwest to increase our business and build our local name. It worked. Our billboard campaign did exactly what it needed to do. It was money well spent.”

-Brook Thalgott is a graduate from the University of Regina and Simon Fraser University, she has more than 15 years of experience in marketing and communications.